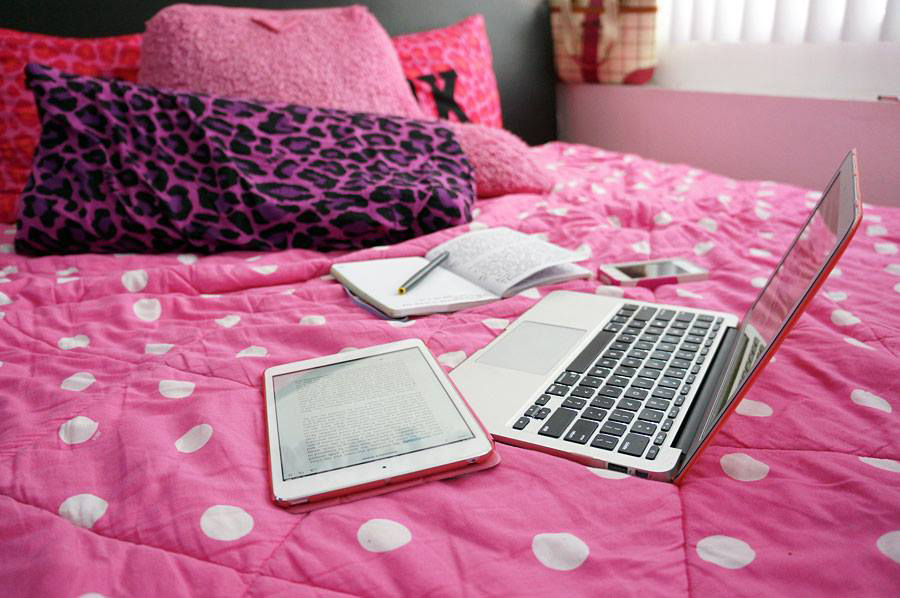 Write what you know, and write what you love. Write the story you’d want to read. All the writerly advice I’ve read has always been the same, but even with those words rattling around in the back of my mind, I never took the time to heed their counsel.

That is, until National Novel Writing Month (NaNoWriMo) came along.

NaNoWriMo is a one month long novel writing journey where would-be authors from amateur to pro around the world are challenged to complete a 50,000 word novel from scratch starting on November 1st, and ending on November 30th. After hearing about this project last year, I found the idea exciting! Unfortunately, it was much too late for me to participate, and so I vowed to join in the festivities when next it came around.

That time is now.

Those of you who’ve been following me on Twitter, Facebook, and Google+ have already seen hints of the novel I’ve been brewing up for the past four days, and at 7,000+ words in, I have to say: I’m pretty pumped about this book. I just can’t believe it took me so long to write it.

I grew up reading the types of stories where valiant princes rescued damsels in distress from tall towers while dragons swooped from overhead, laying fiery waste to the countryside. I nursed my imagination on the teat of epic fantasy adventures where dastardly villains cast terrifying curses and sought to overthrow both kings and kingdoms. I fell asleep at night to a mind full of sword fights and magic spells, to wish-granting artifacts and their faerie guardians. To assassins. To heroes. To wars, knights, and their steeds. To troll battles and monsters of gargantuan proportion.

That was my childhood.
That was what I loved.

And that is what I’m writing.

With every terrible fantasy-story cliche I write into my novel, I grin, because those cliches are what I love best about my favorite childhood fairytales. Sure, the snooty princess thing is overdone. Sure, there are enough tomboyish girl protagonists in the world to fill a stadium or two. Sure, the prince-who-doesn’t-actually-want-to-be-a-prince thing is overplayed. But man do I love those sort of stories. When I find myself second guessing a character in my book because of the worry that my readers might have “been there” and “done that”, I remind myself: Hey. This is something I would want to read.

So fuck it.
Fuck the criticism of cliches.
Fuck the eye rolling at a phrase turned one too many times.
And fuck the whining at stereotypical leads.

These are the characters I love, and so into my novel they go, ingredients picked by a wild woman cackling while she stirs her bubbling potion of fantasy adventure to life.

Maybe they’ll tell a story with a predictable ending. Maybe they’ll wrench hearts when one I’ve carefully crafted to win the love of my readers winds up dead. Maybe they’ll move in a direction so unlike anything ever heard of that they’ll set minds reeling at the prospects of what the imagination can accomplish.

Whatever they do, they are mine to command, and mine to send on one amazing journey fit to shelve among the stories I so cherished in my youth.

And what I love most of all about this process is … I’m writing. I’m writing again. Like, really writing. And I don’t mean the sort of writing that happens every other week like here on my blog when inspiration suddenly strikes. I mean the sort of inspiration and creativity that comes when I’m forced to sit with my novel and immerse myself in its fictional world for hours at a time, getting to know my own characters, spending my early mornings and late evenings with them, staying up with their dialogue when I can’t sleep, helping them live their lives and tell their stories while my own life waits for me on the back burner. I’m talking about the sort of inspiration for writing that comes when I realize I have a deadline to fill and readers to appease, when I know that folks have contributed donation after donation in my name, eager to see me complete my work.

And speaking of donations …

I cannot believe the amount from friends, family, and followers that I’ve managed to raise over the past few days. Your donations have put me in the running to receive so many amazing prizes and rewards, and upon completing my novel, I’ll be able to show off that swag in all its NaNoWriMo novel-winning glory! I can’t thank you all enough! 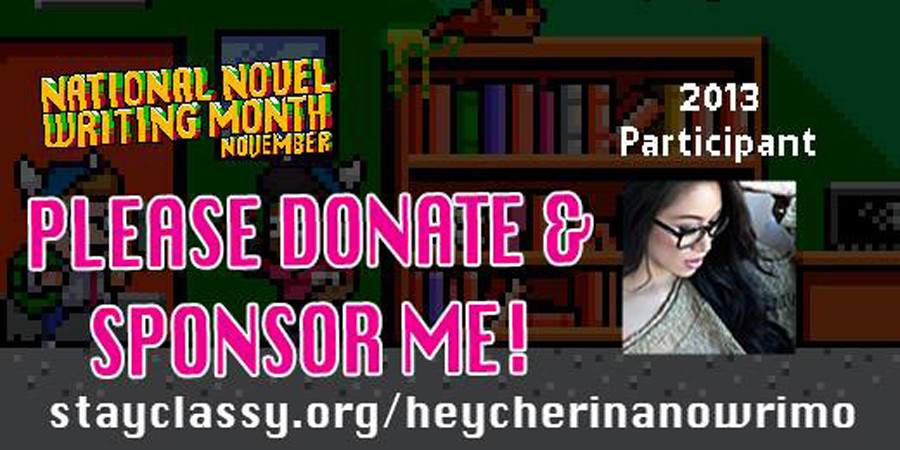 To check out my fundraiser and make a donation, please head here:
http://www.stayclassy.org/heycherinanowrimo

You can find out more about my fundraiser there. I would greatly appreciate your support.

To those of you who’ve already donated (some of you who’ve even donated twice — whoa!), thank you again. Your donations have helped keep me out of trouble for the past few nights. That is, I’ve left wild parties early (much to the chagrined groans of my hosts), skipped out on happy hour with friends, and avoided simple things like small dinners that might’ve turned into staying up past dawn while indulging in inebriated pleasures — all for the love of my novel, in thanks of your support, and to prove to both myself and my sponsors that I am fully capable of writing this book.

PS. In my next post, I’ll share with you the first chapter of my book to give you an idea of what it is I’m writing. I truly hope you enjoy it. And thank you again for always believing in me.

Photoshoot: A Bit Risqué with LensExposure

I am now available for hire, and...

Ballad of a Serial Killer, a poem...

I’m really excited to read the first bit! I’m proud to be a supporter of such a talent. Best of luck the rest of the way!

Here’s to hoping it’s actually any good! Ha. It needs a bit of reworking, but what can you do? With only 30 days to write a whole novel, I guess I can’t expect the first draft of this to be absolutely perfect. It goes up at 9:30AM sharp tomorrow! Banzi

I have the utmost confidence in you and your ability. I am positive it’s going to be great. Let your imagination run wild and all that stuff! :) I love reading anything you write. It’s always fun to read with a pinch of wit and humor. Looking forward to it. (No pressure…. :P)
Ric Heyer
(Banzi)

Welcome to the ultimate home for lifestyle trends, style, beauty, and pet friendly living. I'm Cheri, lifestyle blogger, founder, and multiple award winning marketing creative. This is my adorable corner of the internet. ♥

For all business inquiries regarding sponsorships, collaborations, and more, reach Cheri at cheri@heycheri.com. Find her online everywhere as @heycheri.